We, the Hazara, with a full understanding of human rights and a deep awareness of what happened to us and our land, Hazaristan, in the past, particularly in the last three centuries, ratify the Hazaristan Charter. The purposes are to:

Article 2: Establish Hazara national sovereignty over the entire geographical territory of the greater and historical Hazaristan

Article 3: Form a Digital Hazaristan and establish high security and privacy-protected digital identity along with issuing a national identification number and conducting a census of Hazaristan citizens

Article 4: Eliminate systematic and continual crimes such as racial discrimination, genocide, ethnic cleansing, slavery, and forced displacement against the people of Hazaristan

Article 5: Open cases in Hazaristan national courts and file application for International Court of Justice and International Criminal Court to recognize the genocide of Hazara people; to formally receive apologies, and receive compensation from countries involved in genocide and war crimes against the Hazara

Article 6: Open cases in international courts of justice by the Dai State of Hazaristan to reclaim seized areas of Hazaristan

Article 7: Create positive, peaceful, and mutually respectful relationships with other peoples, nations, and countries of the world

Article 9: Support efforts to equalize the rights of men and women, eliminate anti-women teachings and eliminate all gender discrimination

Article 10: Protect the rights of children in Hazaristan according to the International Convention on the Rights of the Child

Article 11: Strengthen the relationships and foster national unity among Hazara people around the world

Article 12: Promote efforts for economic prosperity and establishment of public welfare, including free public education and medical care with the national health insurance of Hazaristan

Article 14: Establish mandatory support of senior and elderly citizens for the Dai State of Hazaristan

Article 15: Establish mandatory support of citizens with physical, mental, and psychological disabilities for the Dai State of Hazaristan

Article 16: Prioritize establishing renewable and clean energy sources that preserve and care for the environment, and prevent environmental damage to Hazaristan

Article 17: Create a system to safeguard and protect historical artifacts and the cultural values of the people of Hazaristan

a) Any person born to a Hazara parent, whether in Hazaristan or outside Hazaristan, is a Hazara, Hazaristani, and a citizen of Hazaristan.

c) The Dai Parliament shall approve the residence, immigration, and citizenship laws of Hazaristan.

a) Hazaristan is the land of the Dai(s), and the Dais are the main determinants of the Hazaristan borders.

b) Part or parts of the Dais that have been occupied as a result of the systematic crimes against the Hazara since the time of Ahmad Shah Abdali and especially during Abdul Rahman Barakzai in the last decade of the 19th century are still considered parts of the territory of Hazaristan.

c) According to this charter, all decrees and documents that have been used to invade part or parts of the territory of Hazaristan are declared invalid. Recourse or use of such documents and decrees is considered a crime. Any claim to a property within the Hazaristan territory will be heard in the courts of Hazaristan.

Article 21: National sovereignty in Hazaristan is established only with the people's will and their votes in free elections.

Article 22: Access to political power through a military coup and any violence or aggression, including the planning of such acts, that replaces the direct role of the people in power is national treason.

Article 23: Defense and protection of national sovereignty, political independence, and territorial integrity of Hazaristan is an essential principle in Hazaristan.

Article 24: Self-defense is a right. The citizens of Hazaristan have the right to unite and collectively defend against any attack on their property, life, and land.

Article 25: The implementation of the Universal Declaration of Human Rights articles in Hazaristan is considered a principle. Fundamental rights, including human dignity, individual freedoms, and political, social, cultural, and economic rights, are protected in Hazaristan.

Article 26: The Dai State of Hazaristan accepts international documents on the elimination of all forms of racial discrimination; elimination of all forms of discrimination against women; prevention of mass killings; prohibition of torture and other cruel, inhuman, or degrading treatment or punishment; the rights of persons belonging to national or ethnic, religious, and linguistic minorities and the rights of indigenous peoples.

Article 27: In Hazaristan, men and women have equal rights, and any occurrence of gender discrimination is prohibited.

Article 29: No person, force, or institution related to the Hazara has the right to engage and force the Hazara into war and bloodshed with the Hazara. The principle of respect for the right to life and the prevention of civil war shall be generalized in ethics, culture, social relations, public opinion, and the laws of Hazaristan.

Article 30: The governing form of the Dai State of Hazaristan is republican, and its political system is parliamentary.

Article 31: The President is the head of the Dai State of Hazaristan.

a) The president shall be elected by Dai Parliament for a fixed term.

Article 32: The Dai Parliament is the highest legislative body in Hazaristan.

a) The people's representatives in the Dai Parliament shall be elected by direct vote under the law.

Article 33: The Government of Hazaristan is the highest executive authority in Hazaristan.

a) The Prime Minister is at the head of the government.

b) The party or coalition of parties that holds the majority of seats in the Dai Parliament determines the Prime Minister.

c) The Prime Minister forms the cabinet from among the people's representatives in the Dai Parliament.

d) Any affiliation of political parties with foreign powers and countries is national treason, and soliciting or accepting foreign influence in the political competition is a crime.

Article 34: The Supreme Court of Hazaristan is the highest judicial authority in Hazaristan.

a) The Supreme Court Council of Hazaristan shall be nominated by the Prime Minister and the Independent Bar Association.

b) The Dai Parliament shall approve the eligibility of the members nominated for the council of the Supreme Court of Hazaristan.

c) The members of the Supreme Court Council shall elect Dai Dawaras Chief Justice from amongst themselves.

Article 35: Local governments in Hazaristan shall be formed at the levels of Dai, Dai Shar, Dai Bakhsh, and Dai Deh.

a) The geographical boundaries and administrative structure of Dai, Dai Shar, Dai Bakhsh, and Dai Deh, after thorough research and investigation, shall be approved by the Dai Parliament.

b) The power of Dai, Dai Shar, Dai Bakhsh, and Dai Deh shall be determined by law.

Article 36: The Referendum is one of the most important mechanisms for direct participation in major governmental decisions in Hazaristan.

a) The Prime Minister submits the request for a referendum to the Dai Parliament.

b) The approval of the conducting of the referendum is the responsibility of the people's representatives in the Dai Parliament.

c) Referendum shall be conducted in cases of the adoption of an amendment to the constitution, a state of emergency, of war, and peace, and other major, strategic matters, which have been approved by at least two-thirds of the members of the Dai Parliament.

a) The flag of Hazaristan is a combination of three colors, yellow, white, and blue, in order from bottom to top.

b) Yellow is the root and descent of the Hazara and from the color family of the Hazaristan mountains.

c) White is purity and truth. It is in harmony with the winter of Hazaristan. Besides yellow and blue, it is one of the most used colors in the traditional Hazara dress.

d) Blue is a symbol of work, development, and prosperity. It is the talent, ability, desire, and national concurrence of the Hazara. 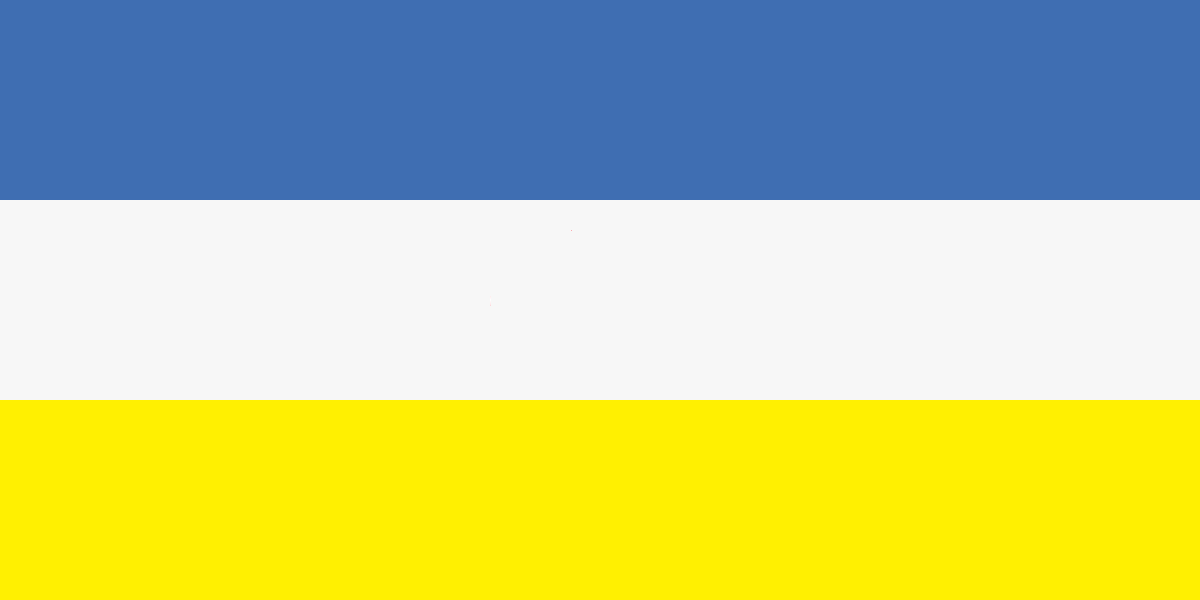 a) The official languages of Hazaristan are Hazaragi and Dari Persian.

b) The High Language Council of Hazaristan is responsible for standardizing Hazaragi.

c) In addition to the Hazaragi and Dari Persian languages, teaching and learning international languages are recommended.

a) The World Hazara Solidarity Day, October 1(2nd of Mizan)

e) The Day of the Great Genocide, September 24(3rdof Mizan)

f) The National Day of Commemoration of Historic States in Ancient Hazaristan, including the Kushan Empire of Great and Small Kushans, the Riwsharan, the Bamyan Lions, the Ghorian, and the Arghunian States, equal to the day of the Bamiyan, Hazaristan Buddhas were destroyed, March 11 (21st of Hut)

h) The National Day of Right Seeking, Revival of Identity and Fight against Monopolies and Totalitarianism, equal to the day of martyrdom of Abdul Ali Mazari, March 12 (22nd of Hut)

i) The National Day of Enlightenment, equal to the day of organized attacks by chauvinist circles and terrorist groups on the massive civil demonstrations of the Hazara Enlightenment Movement, July 23 (2nd of Asad)

Article 40: The Hazaristan Charter with the preamble, in six chapters and forty articles in Hazaragi, Dari Persian, English, and Russian released by the Pioneers of the Hazaristan Independence Movement on April 11, 2021.

The Pioneers of the Hazaristan Independence Movement